in solar tracks 01 22 December 2019 by SolarSoundSystem 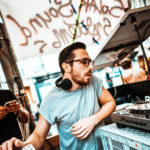 From Sun Ra to Joy Division, via Oumou Sangaré, Jay Ka produces and DJs from his various musical influences. He makes the most of his musical universe by becoming soaked with urban rhythms from the countries where he grew up, such as Senegal or Reunion Island. Those musical worlds that surrounded him became his sound playground, and each culture feeds his musical experience. At the age of 16, he got behind the decks for the first time and began mixing at a rave party. At the beginning of the 2000’s, he mixed on a regional radio where his programming was a big hit, and from there he crossed Europe and played in the most influential European clubs, in cities such as London, Barcelona and Brussels.

Jay Ka is featured on the Solar Tracks # 01 compilation

No products in the cart.